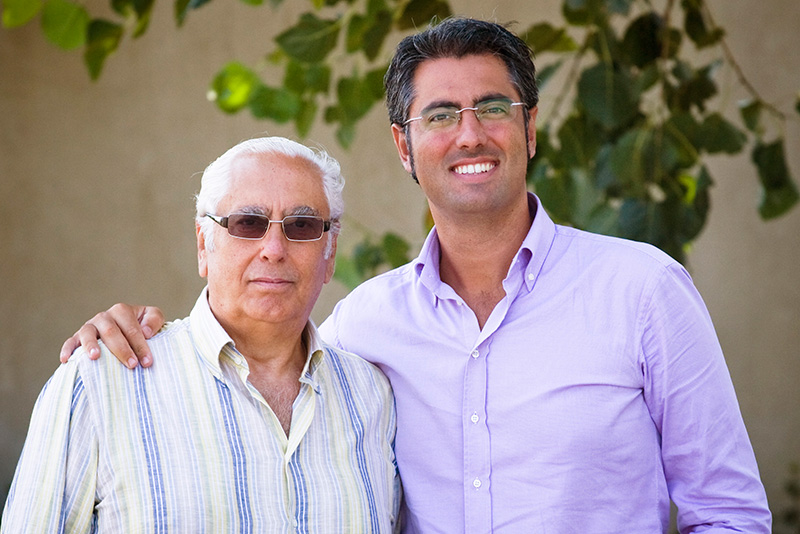 Tenute Rubino is a story of a family’s deep love for a land and its rediscovery. The winery was established in the early 1980s by Tommaso Rubino—the first to recognize the modern viticultural potential of a territory with such an important past. Both the traditions of Salento and a vibrant entrepreneurial spirit have been passed down from Tommaso to his son, Luigi, who has since taken over with the support of his wife, Romina. Luigi has undertaken this entrepreneurial legacy, pouring all of his passion into the family’s winery and making it a global ambassador of Apulian viticulture. After all, winemaking is an ancient art here in Jaddico: over the years, archaeologists have brought to light a Roman manor house filled with kilns, where Visellio—the owner of the estate—fired the amphorae used to export his wine to the four corners of the Roman Empire. At the time, this land was home to extensive vineyards and served as an important manufacturing center for wine containers.

Winemaking is, after all, an ancient art here in Jaddico: over the years, archaeologists have brought to light a Roman manor house and the kilns where Visellius, the owner of the estate, fired the amphorae used to export his wine to the four corners of the Roman Empire. At the time, this land was home to extensive vineyards and served as an important manufacturing centre for wine containers.

Twenty centuries later, Tommaso Rubino chose this ancient and precious viticultural area as the home of his new company, and here he began planting typical Apulian native varieties such as red-skinned Negroamaro and Primitivo onto pre-existing root stock. Then in the early 2000s,Tommaso’s son Luigi— heir to his father’s vision of Puglia’s viticultural potential and extraordinary resources—continued the advancement of the quality of the wine, bringing the family’s vision to life. 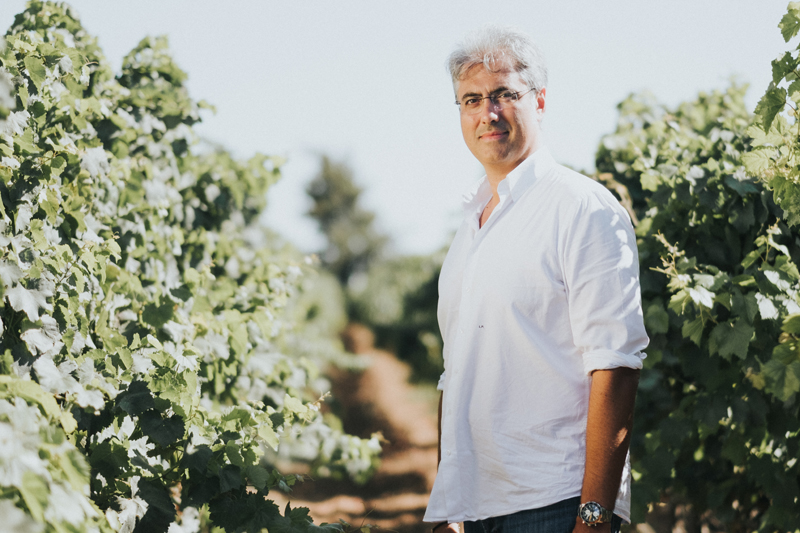 From a very young age, winemaking has been more than a profession for Luigi—it’s been a fervent passion. Today he is at the helm of the family company, having honed his craft under the instruction of his father. Energy, rigour and knowledge intertwine to make Luigi Rubino a leading voice of quality Italian wine. Today, he travels the world promoting this passion: fine wines that are the result of cutting-edge viticulture and the noble traditions of his native region. 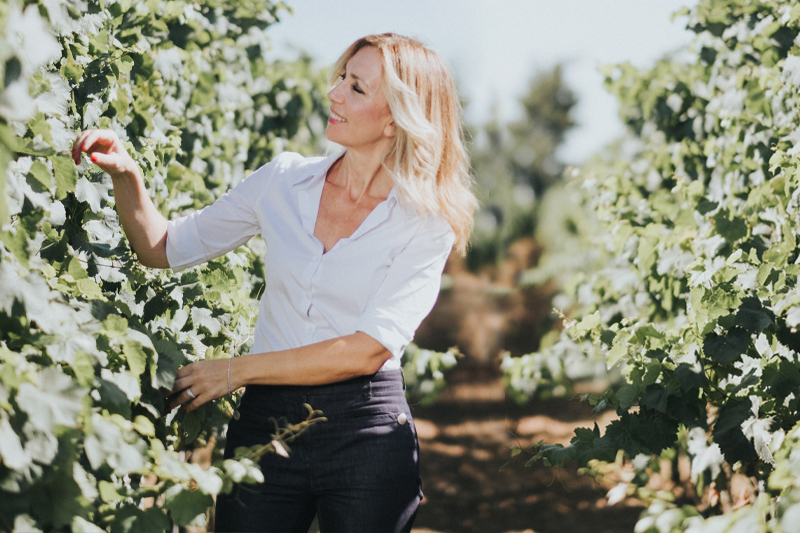 Luigi’s partner in both life and business. They first met at work, sharing an entrepreneurial path centered on communication, internationalization and organization. She shares Luigi’s core beliefs which shape her approach to everything she does: the value of human capital, training and business culture, and multiculturalism as a
generator of wealth and empowerment for youth and women inside and outside the business sector. 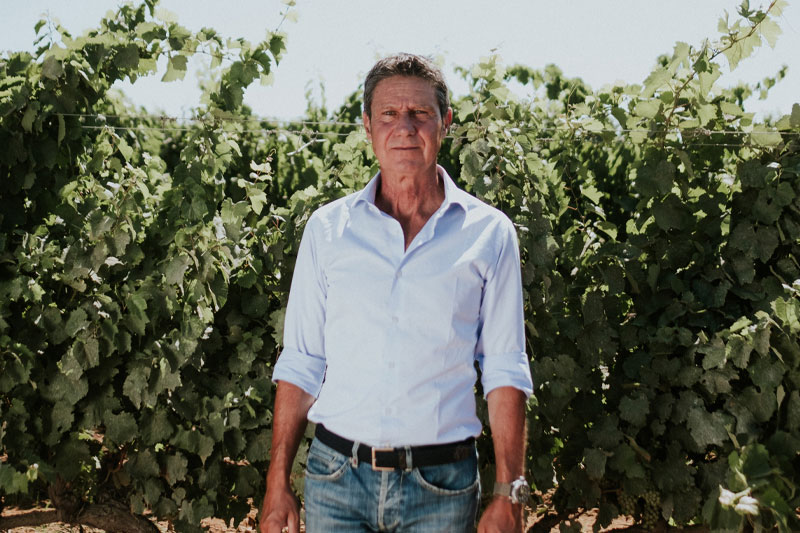 Piernicola oversees all aspects of the agronomic strategy and sets the production protocols for each estate, grape variety and vineyard parcel. A story of passion and dedication ties him to Tenute Rubino, where he’s spent the last thirty years providing the winery with an abundance of viticultural knowledge from planting and vine maturation to irrigation and other agronomic practices.

The relationship between Piernicola Tondo – agronomist and technical consultant at Tenute Rubino- and the wine world is deep rooted since his adolescence, among the rows of vines in San Pietro Vernotico, his birthplace south of Brindisi, and in the Surano countryside where, in his family’s small company, he passed hours and hours observing with a child’s curiosity, all the manual production procedures of the grapes. A passion that became a life project after excelling in his agronomy studies which led him to complete a Degree in Agricultural and Forestry Sciences at the University of Bologna in 1983. The call back to his homeland is strong and uncontrollable. Piernicola returns to his Salento and comes into contact with the olive growing and winemaking world, through his first collaborations with wine cooperatives. A few years later, in 1988, he enters the world of Tenute Rubino: a journey which develops in parallel with the evolution of a young and ambitious company that is already looking to the future thanks to the foresightedness of its founder, Tommaso Rubino, with Piernicola they begin to develop a broadly scoped programme with the objective of renewing the company’s viticultural assets.

Intense work meetings which over time will give life to broader ideas, and where a profound friendship will form. Both begin to share the idea that such significant quantities of grapes should be taken advantage of and transformed into a short distribution chain. It is the beginning of a shared journey with Luigi and the oenologist Luca Petrelli and Piernicola will personally contribute to the success of the company and will quickly become not just a trusted team member, but one of the family, in line with the close connection and the story of Tenute Rubino which has become his second home.

From quality evaluation of the grapes to the bottling and commercialisation of the finished product, Luca follows every production phase of Tenute Rubino’s wines. His 30+ years of experience has led him to become a man of precision—able to recognise a wine’s potential simply from observing the grapes. Luca’s family has winemaking roots so it’s safe to say wine runs through his veins. He’s been working alongside the Rubino family for more than twenty years, both sharing the same oenologic vision that has led them to produce wines of extraordinary quality—each an authentic expression of their distinct terroir.

This is another wine story which began among the paternal vines, evolving over time with agricultural studies, succeeded by a specialisation in oenology.

Luca is a mediterranean nose but with a pioneering spirit, who doesn’t settle for remaining within the tradition, and looking towards the future rebirth of Apulian viticulture and oenology. For Luca the vine is family. Since he was a child, in the second half of the 70s, he followed his father Francesco during the harvest in the small family business, taking part in the harvest and the vinification process, from the pressing of the grape bunches to obtain the must – in the small Locorotondo millstone, his home town. His passion for the wine world, deep rooted in agricultural traditions leads him to the Agricultural Technical Institute with a specialisation in Viticulture and Oenology. After a few years professional experience in a winery in the Murgia, on the 7th December 1999, Luca made his entrance into Tommaso Rubino’s office, and during this first meeting he was instantly struck by Tommaso and Luigi’s entrepreneurial vision, who laid before him a project to grow and develop Tenute Rubino which Luca signed up to immediately. It is the beginning of a journey that has lasted more than twenty years and which coincides with the creation of the Susumaniello project, Luca Petrelli’s favourite grape variety, together with Luigi and Piernicola Tondo, have declared it a symbol of the viticulture in the Brindisi area and the Salento. Luca is particularly struck by the sculptural form this vine takes with age, and with its very small bunches, with its blueish grapes. Love at first sight- shared with the entire Tentute Rubino team- that will increase with each harvest. Today he is regarded as one of the ‘historic’ figures in the company, to which many young oenologists look up to as a point of reference. 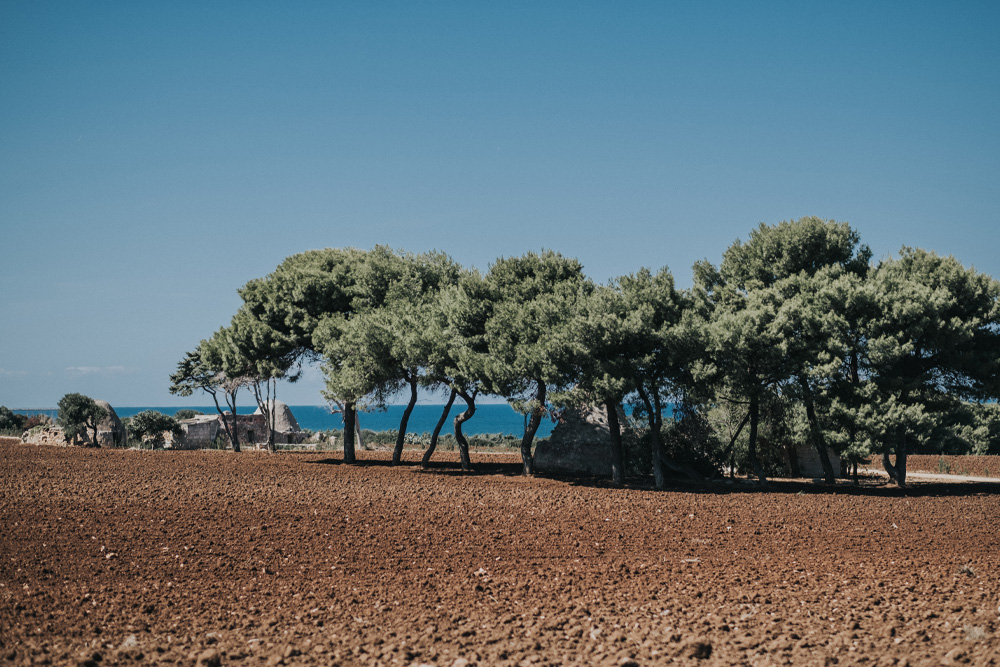 Today, the mere mention of the word “Puglia” is enough to evoke a gallery of images, aromas, flavours and above all, the sea. Specifically the waters of the Adriatic and Ionian that envelop this narrow stretch of land, the heel of the Italian peninsula, a treasure chest of ancient cultures and traditions. A western protrusion pointed towards the Balkans, Greece and southeastern Europe, where the sea unites rather than divides.

A frontier region where everything ends and everything can, at the same time, begin again. It’s the land of the Taranta where magic ritual, folklore and music come together on Warm, endless summer nights. A landscape scattered with ancient farmhouses, trulli and some of Europe’s most exquisite Baroque architecture, as symbolised by the visual poetry of a city such as Lecce. 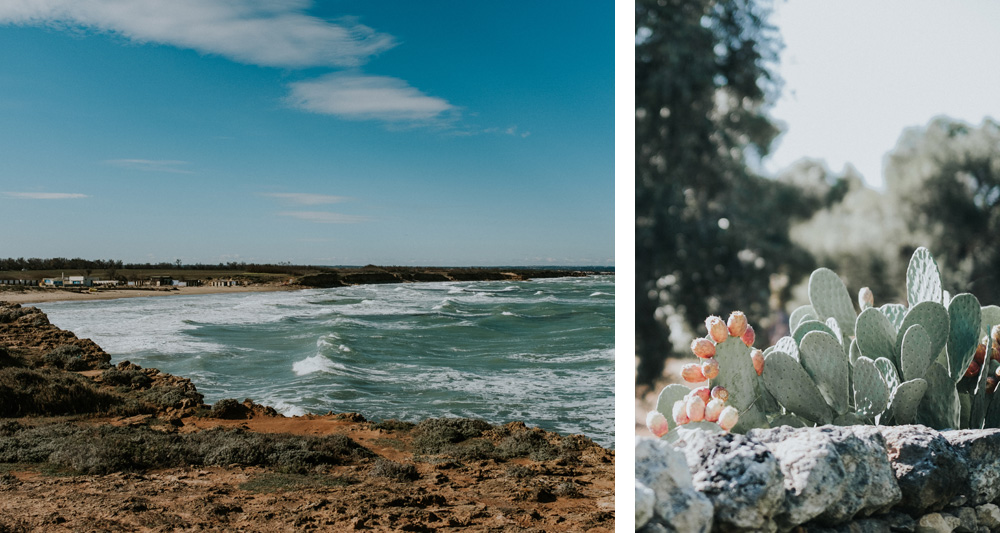 Salento, the heel of Italy, is a treasure chest of history and tradition, this area divided among the municipalities of Lecce, Brindisi and Taranto, was once known by the ancient name Messapia, which means ‘land between two seas’, crossed by countless peoples and cultures.

Up until the 7th century the area was under the rule of the Byzantine Empire and later become a frontier
between the Byzantines and the Langobards, and later the Saracens. A land ruled by the Normans, Anjevin, Aragonese, Turks—who erected countless watchtowers along the Salentine coastline—and lastly The Spaniards and Bourbons. A small yet extraordinary sliver of land, the beating heart of the Apulian region, and the soul of a unique viticultural centre such as Brindisi. Here, the vine has found its ideal habitat, a history that Tenute
Rubino wishes to keep alive by producing wines which have renewed the identity of Apulian oenology.

Brindisi entrepreneur, Tommaso Rubino, purchases the first two estates in inland Brindisi: Uggìo and Punta Aquila. The Rubino family gives the go ahead for a re-evaluation of the ancient cultivars typical of the Brindisi area.

Purchasing of the Marmorelle and Jaddico estates north of Brindisi. A unique area, dedicated to viticulture for over 2000 years. The collaboration with the brilliant agronomist Piernicola Tondo begins.

Luigi Rubino finishes his university degree and assists his father Tommaso in the management and development of a company which aims to create a standard of excellence, with nichè products.

Luigi Rubino decides to revitalize and repair the reputation of native Apulian grapes, developing a winery in Brindisi to help him accomplish this feat.

Torre Testa is launched, heading up the Susumaniello Project. An adventure that will become an icon for traditional Apulian oenology. The first vintage is a record breaker: 90 points in Wine Spectator, the first Tre Bicchieri from Gambero Rosso and the first 5 Grappoli from Duemilavini.

Saturnino, Jaddico, Punta Aquila, Giancola, Miraglio, Oltremé and Torre Testa Rosè make their debut, the result of a long and continuous study of the native grape varieties Susumaniello, Privitivo and Negroamaro by the production team.

Tenute Rubino becomes more than just a winery. Romina Leopardi creates a promotional project dedicated to adding value to the area through a series of annual events, the creation of custom-made tourist and cultural experiences, and international educational projects.

Luigi Rubino is elected President of “Puglia Best Wine”, a consortium for the promotion and export of quality wines grouping together five prestigious Apulian wine brands, including Tenute Rubino.

Tenute Rubino begins its sparkling wine project: Sumaré 30 months—the first traditional method Susumaniello in the world. The creation of Sumaré proved that even the South can master the art of excellent sparkling wine.

The agronomic management of the Ostuni vineyard begins, used for a rare but extremely typical Salento variety: Ottavianello. The first vintage of Lamo, 100% Ottavianello, is launched.

Tenute Palombara, near Lizzano, is purchased and dedicated completely to the production of Primitivo. The estate is the heart of the Primitivo di Manduria DOC—one of the most well-known Apulian appellations.

The building project for the new ageing cellar gets underway, designed according to the most recent guidelines for eco-sustainability, modernity and environmentally friendly. A multi-functional structure to promote wine culture, immersed in the Jaddico estate vineyards. The opening is expected for 2023.

In March of 2022, the company obtains Equalitas— the Sustainable Organization Module Certification that promotes sustainability culture in the agricultural and viticultural industry on an international basis.