8 kilometres north of Brindisi, the vineyards of the Jaddico estate extend along the Adriatic coastline, divided by the Giancòla canal. The vines—a mix of Guyot-trained, spur cordon and bush-trained—are established at a density ranging between 5,000 and 6,000 vines per hectare. They’re grown on loose, sandy, limestone-rich soil which ensures a well-developed root system and optimal water drainage. A portion of the vineyard is located close to the sea, by the Torre Guaceto nature reserve and the beaches of Punta Penne.

The pedoclimatic conditions of the Jaddico Estate make it an excellent wine-making terroir: it is here that the Susumaniello Project was first launched and has grown through the years alongside a rich heritage of native varieties such as Malvasia Bianca, Primitivo and Negroamaro – all thriving thanks to the optimal sun exposure they receive and their proximity to the sea.
Harvesting times on the estate range from the first ten days of August to the first decade of October, the time when the last bunches of Susumaniello are picked. For the most part, harvesting is carried out by hand, especially by women, true guardians of this ancient agricultural practice. Attention to detail that goes hand in hand with our care for the environment, as the company adheres to the principles of Integrated Production with a reduced environmental impact.

Perched on a rocky cliff overlooking the Adriatic Sea along Brindisi’s Northern coastline, the medieval Saracen tower, Torre Testa, still stands today— a surviving testimony of Salento’s rich history that has shaped its landscape since ancient times. While it was originally erected during the 16th century, it’s still recognized as one of the region’s natural landmarks to this day. Torre Testa can be reached by the Giancòla canal, which cuts through Brindisi’s countryside including Tenute Rubino’s farming estate of Marmorelle. Originally, its full name was Torre delle Teste di Gallico, which the locals then truncated into “Jaddico”, derived by the ancient Langobardic word for ‘forest’—symbolizing the rich vegetation that covered the area.

The name of the canal is a tribute to the ancient owner of a farmhouse built here in the sixteenth century, Giovanni Nicola Villanova, it is believed to result from a combination of his two Christian names: Gian-Cola. An area that owes its age-old agricultural vocation to the abundance of water: here, the Romans established a booming viticultural centre and a mosaic of vineyards famous for producing the finest wines of the empire, as evidenced by the locally manufactured earthenware amphorae found by archaeologists. Traces of human settlement in the region date back to prehistoric time, as attested by archaeological evidence from the Palaeolithic and the Bronze Age. The availability of fresh water and food, easily sourced in an area so rich in wildlife (including the abundance of fish in the nearby sea) facilitated the formation of early communities. Today, thanks to the presence of habitats such as the Mediterranean salt meadows and temporary ponds, the mouth of the Giancòla canal has been declared an EU site of community importance. 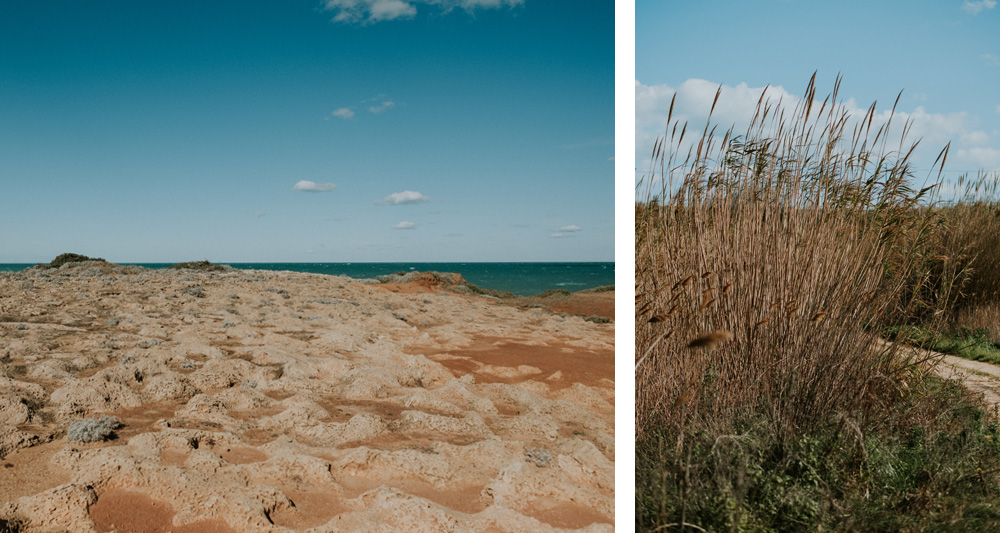 The Giancòla canal fans out into small ponds of water before flowing into Torre Testa’s nearby sea. The soil here is mostly loam and clay that’s very rich in humus. The area resembles a marsh due to the abundance of rushes; these plant species, such as spiny rushes and black sedges, grow along the banks of the canal along with many typical Mediterranean shrub-land plants, like the lentiscus, holly oak and Phillyrea.

There are many more plant species that benefit from the presence of the canal: hairy pink, spotted rock-rose, figwort and several types of orchids of the genus Ophrys and Serapias, without forgetting the very common Ericaforskalii, a kind of heather native to the area, and the chasteberry. Moving closer to the sea, the landscape of cliffs and coastal sand dunes hosts a typically Mediterranean wildlife with its abundance of sea-lavender, glasswort and spurge. Finally, 80 metres away from the mouth of the Giancòla canal, the sea bed is a veritable grassland of Posidonia Oceanica, a seagrass which plays a fundamental role in protecting the coastline from erosion.

The banks of the Giancòla canal with their dense coverage of reeds are home to many water birds such as coots and moorhens, little grebes and egrets, grey herons, in addition to little bitterns and mallard ducks. The reeds serve as an excellent hiding place for the very elusive water rail, and are  the perfect place to hear the rare song of the bush warbler. High up in the sky, marsh harriers survey these birds’ hunting grounds— streams and surrounding vegetation inhabited by tree frogs, green toads and grass snakes.

The wetlands at the mouth of the stream are home to the European pond turtle, protected by the Habitats Directive and several international conventions. As we pause to look across the valley, to its slopes covered in Mediterranean shrub-land, we can easily spot the nests of birds such as blackcaps, and several types of finches and warblers, while kestrel falcons hover in the sky looking for prey. As we walk through the tall grass, it is common to find what look like paths drawn in the ground, they have been created by the passage of foxes and badgers.

The land that’s now home to the vineyards of Jaddico and Marmorelle has always been at the heart of a thriving viticultural tradition since the 1st century BC. The entire agricultural holding once belonged to Cicero’s cousin, Visellius—an influential player in ancient Rome’s political scene of the time. In this region, Visellius presided over a remarkable production of grapes and a thriving wine trade, as evidenced by the archaeological excavations undertaken in the 1980s which brought to light two sites of exceptional value: one in Giancòla, today’s estate of Jaddico, and another in what is now Marmorelle.

The excavations also brought to light a manor house, a cellar, a marble statue of the god Bacchus, and the kilns employed to manufacture the amphorae used to store and export wine across the entire Roman empire. A very important production, as attested by the amphorae found not only along the Adriatic and Tyrrhenian coastline, but also across Western Europe and in the eastern Mediterranean as far as the Black Sea. A very important production hub believed to have been abandoned in the second half of the 1st century BC, perhaps due to the civil wars of the time, and to have become operational again in the Augustan age, under the management of freedmen such as Petronius Sostratus and Marcius Saturninus, who oversaw the work on behalf of their masters.

Since the early 1980s, archaeologists have unearthed ancient amphorae, kilns and an artificial mound composed of broken and discarded clay pottery, most of which dates back to the late Republican era and the Augustan age.

According to the archaeologists’ hypotheses, kilns were established in places where clay was widely available. The slaves who worked here would shape the handles first, stamp each one and then attach them to the body of the amphora: this is why we often find the imprints left by the potter’s fingers as he fixed the two handles to the vessel. The firing took place in the kiln over several days; the amphorae were then left to cool before the roof of the kiln was broken up and dismantled.
It is estimated that a 70 cubic-meter kiln could hold as many as one thousand amphorae arranged on seven or eight levels and that every firing required 50 tons of wood. On the site of Giancòla, located a little further south on the eastern side of a canal, which was navigable at the time and equipped with a docking structure, a large number of amphorae were found, bearing the seals of Apollonides, Archelia and Philippus, the names of the slaves who worked on the plants owned by Visellius in the first century BC. On what was once the production site we find two large rectangular and one circular-shaped furnace, with underground combustion chambers surmounted by a raised perforated floor and a large chamber where the amphorae were placed ahead of firing.
The kilns were covered by a heat-resistant vault which could be removed after each firing. The furnaces located in Marmorelle, also served by the Giancòla canal, were the property of Visellius as well. Here, in addition to numerous earthenware remains, four more rectangular kilns were uncovered.