At the heart of the Brindisi interland, between the Adriatic and Ionian Seas, stands Tenute Rubino’s new estate: Padula di Geremia. The estate’s composed of 5.3 hectares, 300 metres above sea level, and is located in Valle d’Itria contrada of the same name. This area is characterised by the presence of trulli houses, ancient farmhouse estates, a hundred-year-old olive trees and karstic caves. The estate, positioned between the communes of Martina Franca, Cisternino and Ceglie Messapica, extends into a wide valley specially devoted to the cultivation of native grape varieties like the Bianco di Alessano, white Minutolo and Verdeca- a specific selection of clone was planted 14 years ago with a yield per hectare between 70-90 tonnes.

Small vineyards for a precise viticulture, with very particular and niche productions. The orography is jagged, the dominant area is mid slope, characterised by plateaus, slopes and deep light grey calcareous soils, rich in small stones. The climate pattern is particularly favourable: warm- dry summers and heavy rain showers, mainly spread out over in the autumn and winter months (average 640mm/year), breathing life into this unique terroir for vine cultivation. The recorded temperatures inside and outside the vineyards demonstrate the importance of the temperature ranges on the quality and the quantity, with diurnal ranges at their lowest of 4°C and a maximum of 33°C. 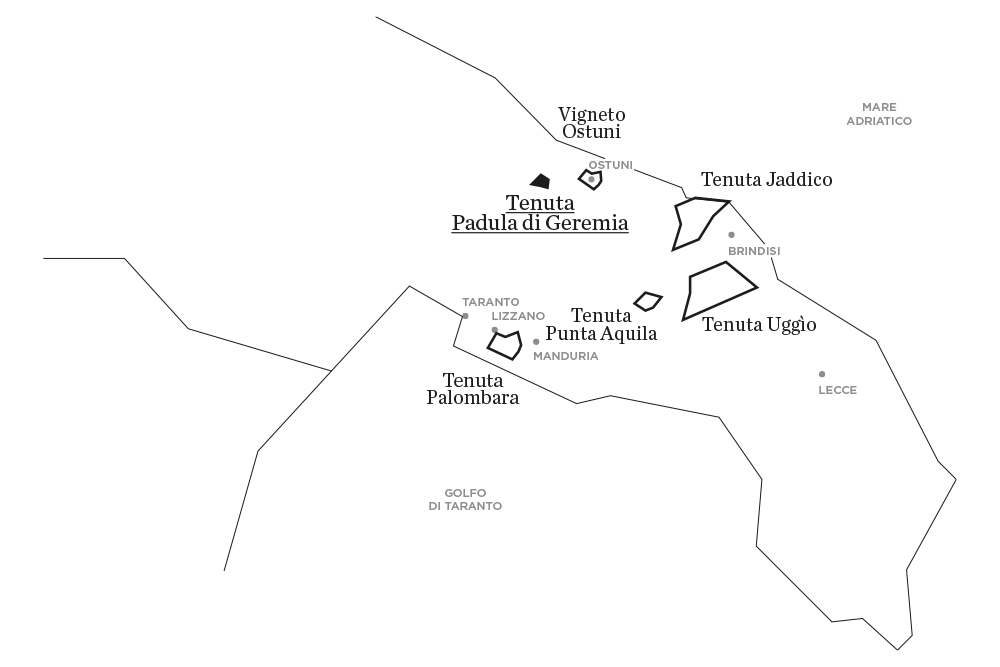 Verdeca
With disputable origins that are most likely Greek, Verdeca is one of the most widespread white grape varieties in the Valle d’Itria; historically cultivated in the area around Gravina di Puglia, taking its name from the greenish ‘verde’ colour of the skin. The bunch is average size with oval grapes and significant bloom. In the past, this local variety was used as a base wine for both sweet wines and Vermouth production, but thanks to research and extensive commitment by several wineries in the area, it’s now vinified as a monovarietal, dry wine.

Bianco di Alessano
Bianco di Alessano is a typical Apulian white grape variety originating from Valle D’Itria. For many years it was used as a blending grape with Verdeca for the production of base musts, used for making sweet wines and Vermouth. It’s characterised by its orbicular leaves, with medium to large-sized bunches that hold a cylindrical shape. The skin is straw-yellow in colour. Over the years, as a result of low productivity, it was slowly abandoned in favour of other local varieties which guaranteed higher yields. This variety is to be considered a relic of Apulian tradition, together with other appealing but marginilised varieties.

Minutolo bianco
Known in ancient times as Fiano Minutolo or Moscatellina (the true name of this white grape variety), Minutolo was used to produce wines from the PDO Locorotondo and Martina Franca, only to be replaced by Bianco di Alessano and Verdeca grapes due to its low-yield. Almost disappearing from the oenologic picture completely, it risked extinction before luckily being rediscovered over the last twenty years through a virtuous development program. Characterised by a distinct, captivating aromatic quality, the delicate Minutolo grape is also planted in surrounding areas, such as the territory around Gioia del Colle.

Valle D’Itria is a production area with karstic origins, surrounded on both sides by the Ionian and Adriatic sea. It’s rich in vegetation—gorgeous groves of olive trees alternate with beautiful vineyards and oak forests. This exceptionally florid production area has flourished in the last twenty years as small villages have expanded across the valley and international tourists have swept in.

Historically, its story is intertwined with the coming to power of the Messapians who initially occupied the city of Ceglie Messapica (known as Kalia or Caeliae), named by the ancient Greeks as “Messapia” and, afterwards taking power across the whole of the Salento peninsula. Over the years several archeological discoveries have been made: forts, standing stones (raised fortifications of megalithic blocks and standing at over 20 meters and 60 meters wide), necropolis, as well as inscriptions, coins, and various other artifacts and ceramic and metal objects.
Ceglie Messapica is also considered to be the capital of the Mediterranean diet, which over time has formed significant productive initiatives to promote the area and its specialities, and where restaurants have understood how to give substance and add value.