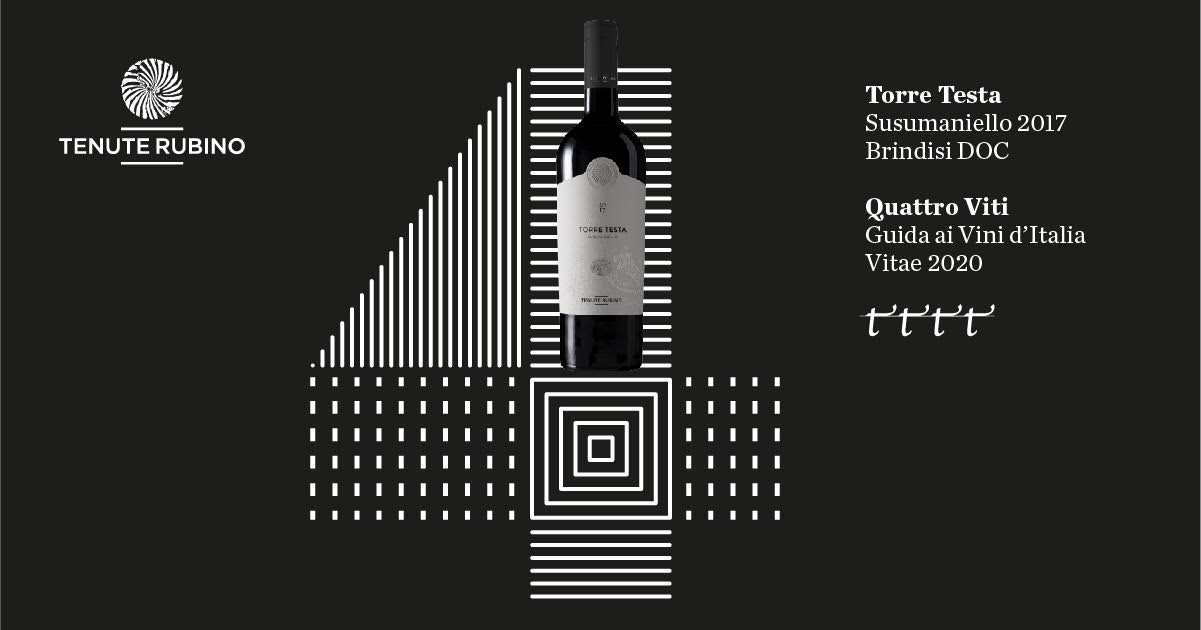 Brindisi – September 2019. From its beginnings in 2000, the Susumaniello project has been the heart of Luigi Rubino’s winemaking philosophy, the meeting point of tradition and innovation in an area, the countryside of Brindisi, known for its thousand-year old viticultural vocation.

The native Susumaniello is in fact an authentic heirloom variety of the Salento region, one which Tenute Rubino has rescued from oblivion. The emblem of the entire project is the label Torre Testa, a monovarietal Susumaniello which has received ample recognition from international wine guides over the years.  So it is with pride and delight that, one again, we see our wine awarded on Vitae, the Wine Guide published by the Italian Sommelier Association now in its sixth edition. Torre Testa received the prestigious Four Vines, the guide’s highest recognition.

“This award form AIS – says Luigi Rubino, who chairs the company together with his wife Romina Leopardi – is all the more important to us because Torre Testa has always been, since the beginning of the project, our most treasured wine, the embodiment of the significant discovery work and the enhancement of a vine that, for almost half a century, had been practically abandoned. Fine wine lovers, from places as far as Tokyo or Düsseldorf, cities which together with Zurich and New York have become the greatest buyers of Torre Testa over the years, speak of a success that comes from the appreciation of Susumaniello’s incredible character”.

Torre Testa, obtained from partially raisined Susumaniello grapes, is a truly emblematic wine, a perfect union of complexity and elegance. An emblem, also, of the renaissance of Salento’s winemaking, an intense red with an unmistakable acidic kick and fine, subtle tannins.