Falstaff releaseS the results of its “Italian rosè TROPHY”: TORRE TESTA ROSÉ and SATURNINO have enticed the tasters of the prestigious german magazine and are now included in their LIST OF italy’s finest

Tenute Rubino’s summer has been full of surprises and important international awards. One such recognition is the one expressed by Falstaff magazine, a leading wine&food publication available in Austria, Germany and Switzerland, in praise of the estate’s Torre Testa Rosé and Saturnino, which have passed with flying colours the tasters’ evaluation of “Italy’s Rosé Trophy” 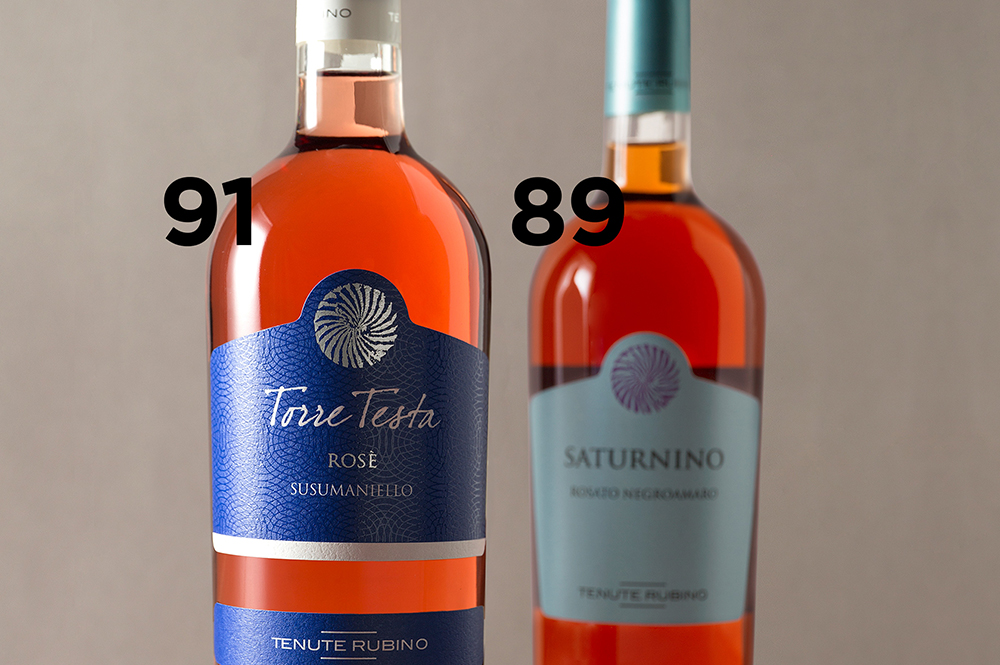 Torre Testa Rosé 2017 was awarded 91 points, the panel’s final report describes it as “a luminous coral pink wine with orange highlights”, as for the nose, we have “clear notes of raspberry cordial and ripe red berries”. The magazine’s verdict concludes: “delicate and juicy on the palate, with a distinctive balance”. The secret of this wine is in the Susumaniello grapes, a traditional native variety which has become the star of the company’s production thanks to a rediscovery project brought to life in the 13 hectares in the family’s Jaddico Estate, located the Brindisi DOC territory and close to the Adriatic Sea.

Another great native grape, Negroamaro, is used in the making of another important rosé produced by Tenute Rubino – Saturnino. Its 2017 vintage was awarded 89 points and described by the panel as a wine with a strong cherry pink colour that stands out for the strong aromatic notes of ripe red fruits, such as cherries and raspberries, that characterize the bouquet of this very individual wine.

“These flattering reports – Luigi Rubino comments – reward our daily effort dedicated to the valorisation of native vines such as Susumaniello and Negramaro, veritable treasures of our regional, but also national, agricultural tradition. Every day, we are committed to the creation of wines which can appeal to the most demanding consumers, while honouring the distinctive identity of Apulian oenology. Rosé wine is part of our local heritage and is regaining favour among consumers worldwide thanks to the fresh and intense aromas of fruit typical of Apulian wines of this kind”.