A triptych of excellence in honour of Visellio

An unforgettable and emotional vertical tasting

Tenute Rubino’s Cru takes centre stage in an extraordinary vertical tasting, with a selection of its best vintages (2016, 2012 and 2010) which have shaped the story of this powerful and intense Primitivo. Pure Salento, bottled and offered to true wine enthusiasts. 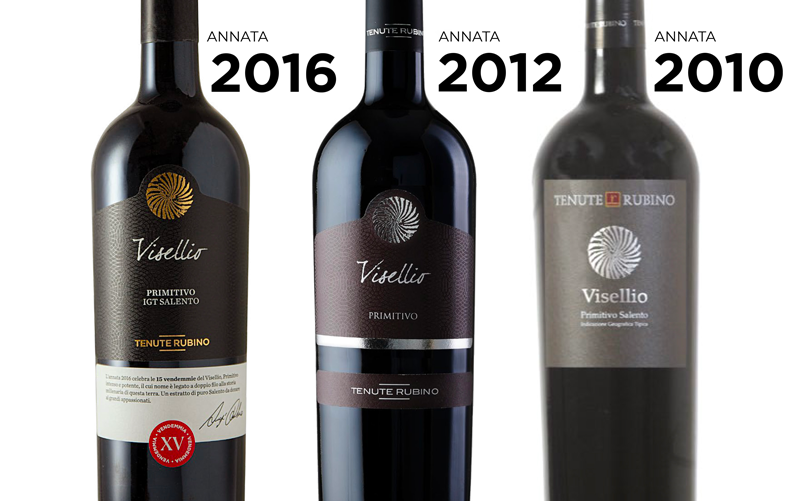 Brindisi- A journey back in time, starting with the vintage currently on the market, the 2016, to the 2010. A unique and unforgettable wine sensory journey, dedicated to a true star of the Apulian winemaking tradition.
Beginning in 2000, this niche wine’s story is inextricably connected to that of the winery. From its production debut the winery believed in its potential of being one of Apulia’s flagship varieties, found within a terroir historically renowned for its high quality viticultural production. Tenute Rubino wanted to celebrate the 15 harvests of its Visellio with a vertical tasting dedicated to three of the best vintages of this Primitivo, which harvest after harvest has contributed to defining the identity of a young winery which today is projected towards the more demanding and competitive international markets. The 2010, 2012 and 2016 vintages represent three examples of its evolution over time, rewarding the consistency and the continuity with which Luigi and Romina, together with winemaker Luca Petrelli, have created a wine making programme that aspires to restore and promote the flagship varieties of Apulian tradition, through representative wines that convey the colours and aromas of their terroir origins. The Uggio Estate, contained within the plateau found half-way between the Ionian and Adriatic Seas, is a natural amphitheatre that gives life to a wine, which over the years, has been met with critical acclaim both nationally and internationally. Here in a small vineyard of around 4 hectares and over 30 years old, single varietal Primitivo is produced, with a yield per hectare of around 4500 kilograms with an average per vine of around 600-800 grams.

“The three vintages central to the tasting”, highlights Luigi Rubino, “despite showing different characteristics and profiles, are all connected by one common denominator: the constant search for the highest quality, achieved thanks to the careful activity in the vineyard, through continuous monitoring of the grapes’ maturation level.”
“A meticulous study and analysis”, adds Luca Petrelli, “allows us to establish the perfect moment to cut the bunches, when the first raisening starts to appear, so as to not increase the level of alcohol and to maintain the unmistakable fresh fruit that distinguishes Visellio”.
If the 2016 distinguishes itself for its smoothness and for its faithful varietal expression, the 2012 reveals itself to be surprisingly fresh and sapid, while the 2010 proves to be a great surprise for its development and longevity, with perfectly intact fruit and thanks to a careful selection of each berry.

“An important wine”, states Giuseppe Baldassare, member of the national educational commission and the Apulian regional representative for the AIS guide, “that has taken its place among the classics of the Apulian winemaking tradition. Tenute Rubino has been among the first wineries in our region to believe in the potential of this variety, contributing more than any other to the resurrection of Primitivo, which here the Brindisi area finds the perfect pedoclimatic conditions to fully express itself”.

Characterised by an impenetrable and brilliant ruby red colour, on the nose Visellio has an elegant bouquet of perfumes and sensations that are difficult to match. Aromas of plums in liqueur, currents and blueberry jam, cloves and nutmeg which alternate with notes of star anise, violets and liquorice. Energetic and captivating at the same time, a seductive and dynamic temperament, powerful yet fresh expression of fruit, finding its balance in the mature and silky tannins and the well calibrated acidity.

“Visellio’s story”, explains Romina Leopardi, Responsible for Marketing and Communication, “has been awarded with international critical acclaim year after year, who have been ready to recognise its quality and its virtues. Thanks to the hard work over the years, it has become an Apulian winemaking ambassador worldwide, particularly in some international markets like Germany, Switzerland, Japan and the United States, where it has achieved particular success among a new group of consumers that are more informed and demanding. Today, to celebrate the 15 Harvests, the 2016 vintage has a personalised label, signed by Luigi Rubino. We wanted to pay homage to a wine that has written Tenute Rubino’s story, and which you can bet will continue to be a source of success and satisfaction in the future”.